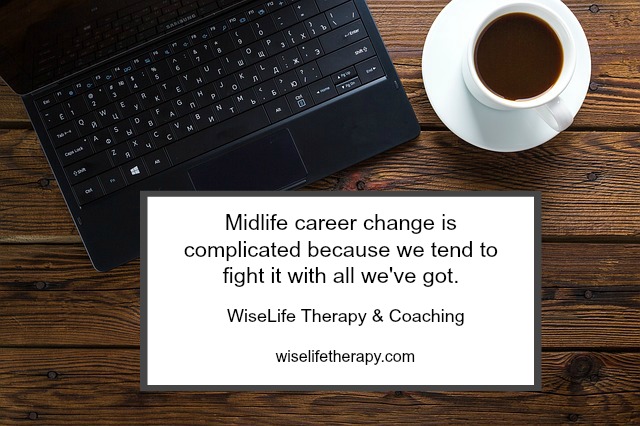 In my early twenties, there was nothing I wanted more than to act onstage. I was quite certain that this was my one true calling, my destiny. Little did I know that it was actually the beginning of my own journey toward understanding that indeed, midlife career change is complicated.

But years before I got to the midlife career change part, I made a rather wild and racy statement to a friend.

I proclaimed, out loud, that there were only two things that were really important to me: acting and sex. (Talk about your stereotypes.)

For someone who’s never been exactly wild and racy, that was a pretty out there thing for me to say.

But I’d just completed a year of acting in six plays, and I loved the parts I was playing. I was also in the heady days of a new relationship (with the guy I’d later marry).

So there was a lot of love and passion in the air.

Still, what I most remember about that conversation is my friend challenging me: Really? You may feel that way now but won’t there be more you’ll want from life?

He was wise beyond his years.

It turned out there was more I wanted from life. And ten years later my passion for theatre was waning and I didn’t quite know what to do with that.

I was floundering. Confused, depressed and full of unanswered questions.

Sometimes I wish I’d known then what I know now…

By the time we’re into our thirties and forties, we’ve developed an abundant repertoire of talents, skills and interests. And just as likely, we may feel bored or disinterested in them.

And the older we get, the truer this becomes.

Midlife career change is complicated because we tend to fight it with everything we’ve got.

I certainly did. Even after a series of less than meaningful “day jobs.” Even when the dream of becoming a professional actor lessened its hold. I still tried to make the dream into something similar.

I reasoned that if I wasn’t going to be an actor, maybe I should become a theatre professor and teach others.

In retrospect, I can see that I was embroiled in what I like to think of as I-Should-Be-Happy-With-What-I’ve-Got Syndrome, also known as Shouldn’t-I-Love-This? (SILT Syndrome, for short).

The SILT acronym is particularly appealing to me because silt is a sedimentary material that builds up and causes obstructions.

In real life, SILT Syndrome often appears when you feel bored, restless, blah about your work, particularly around midlife.

Perhaps you find yourself thinking, “Is that all there is?” But you compensate for the internal discomfort by telling yourself one (or more) of the following:

And even though midlife career change is complicated by the way SILT Syndrome obstructs forward movement, SILT also has the effect of derailing the yucky feelings and shutting them down.

In many ways, it’s a form of denial. A way to lessen the anxiety you may be feeling. But it usually only works for a little while.

The thing is, you need to go through this to get to the other side.

I used to think the best thing we could do was move past the denial, move past the SILT, and face the complications of midlife career change head on. Find a way to make it less complicated, if you will.

But there’s a reason midlife career change is complicated.

It’s about so many things: your identity, your livelihood, your ability to tolerate risk. There may be years of history and family dynamics that keep you tethered to something you don’t really want anymore. And unpacking that is both scary and exhilarating.

No wonder we fight it.

So if you’re in the midst of it, give yourself time. Because you deserve that, above all else.

Just when we have achieved a measure of stability, we may be undermined from below and called to a new direction.