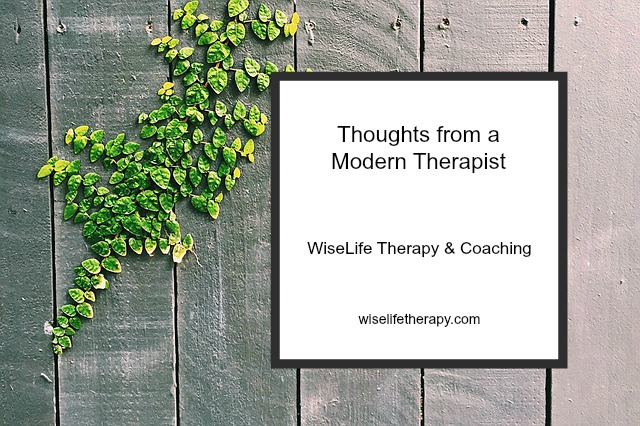 Until late last year, I’d never heard the term modern therapist. And when I saw a mention of it in my twitter feed, I thought it might refer to a therapist who uses the most up-to-date theories or modern techniques.

My curiosity was piqued, so I clicked over.

That’s when I discovered a meme about the modern therapist.

I was absolutely charmed by it. Have a look and see what you think…

A person that sits in the room WITH you. Will be more than a blank slate. Will say more than “mmhmm” and “I see.” Who challenges you. Understands that when you ask questions like “where are you going for Christmas” Or “How did you choose the name George for your baby?” that you’re just trying to connect and won’t shame you for that by responding with awkward silence or brief and cold answers. A person that welcomes cursing if necessary because sometimes life is a cluster *@!#. A person that is not your authority, rather an ally that can help you recognize the patterns in your life that are keeping you stuck and help you find ways to shift them. Someone that can offer you direction but knows you get to decide whether to take it. Someone that can laugh with you. Or maybe cry.

A human being that wants to sit with you.

I just want to say thank you to the author.

I haven’t been able to figure out who wrote it so I can’t give credit. But I have shared it with several colleagues, and their response is always some version of YES.

That’s probably because therapists (or should I say modern therapists?) are a bit fatigued by the cold, impersonal therapist stereotypes that we still see out there in the media at large.

Seriously, the blank slate therapist stereotype has certainly outlasted much of its usefulness.

It was Freud who long ago proposed that a therapist should be a tabula rasa, or blank slate.

He believed it was important for clients to be able to project their own needs, desires and beliefs onto their therapists. And he proposed that in order to do so, therapists must remain rather closed off, sharing very little of themselves, including details of their lives as well as their own values, world views and beliefs.

Of course, he proposed this approach during radically different times. So I don’t think we can really consider Freud’s ideas without remembering the formality of the times he lived in and the norms of social discourse during the early 20th Century.

Furthermore, psychotherapy was a very new field then, and a male-dominated one at that. And apparently even Freud didn’t always practice the blank slate approach that he preached.

Without a doubt, times have changed for today’s modern therapist.

But that doesn’t mean the modern therapist takes up all the space in the room (or on the phone or in the video session) during therapy visits.

Quite the contrary, the modern therapist knows all about appropriate self-disclosure (yes, that’s a thing they teach us in school). And we want to make sure the focus remains on your needs, because that’s what you come to us for.

But we also know that thoughtfully answering your questions or sharing something of our own lives will not automatically take the focus from you. Instead, it may enhance the creative process of therapy, opening doors to client self-compassion, new insights and mutual discoveries.

Because truly, we’re in it together.

This is the part that’s hard to describe, and perhaps the biggest difference between the modern therapist as ally and the blank slate therapist as expert.

At least, I imagine this to be true, but I certainly can’t speak for all therapists.

But as the meme says, the modern therapist strives to be with you. To be in it with you.

When I write that I see how basic and simple it seems, yet I know this is a transformational and rare experience for many of us.

At a most elemental place it’s what we human beings long for.

And I actually have documentation to back this up!

You see, at the start of therapy, new clients complete a questionnaire. One of the questions is this: How can I best support you?

No wonder almost every study affirms that the client/therapist relationship is the most important healing element.

Still, I admit, it can sometimes seem a little bit dicey to be a modern therapist.

As strange as this may sound, I believe many therapists (including me sometimes) have internalized a sort of therapy police force.

Lurking in the background. Waiting outside the door. Listening to make sure we’re doing everything right. Hovering as we write our notes.

No doubt this comes from the profession’s ongoing reinforcement of the requirement to do no harm. And the importance of making sure therapists do not stray beyond the boundaries of ethical guidelines and legal requirements.

Obviously, this is crucial and necessary.

But as a modern therapist, I believe we can do both: uphold what’s in the best interest of you, the client, and be a human being that wants to sit with you.

Again, we are deeply helpful when we risk ourselves as persons in the relationship, when we experience the other person as a person in his/her own right, only then is there a meeting at a depth that dissolves the pain of aloneness in both client and therapist.