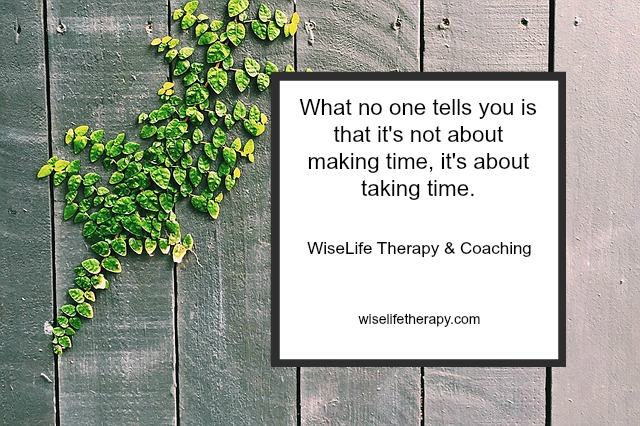 But the thing is, making time for yourself flies in the face of reality.

Time, when you think about it, is constant and never changing. There’s only so much of it.

Of course it would be lovely and amazing if we could magically conjure up more time to do all the things we want to do in a day or week or month or year.

It would be awesome if we had the power to stop time, too, so we could get it all done. And then when the clock started ticking again we’d have loads of time for ourselves.

But alas, that’s not going to happen. And I suspect it would still be hard for many of us to stop the ceaseless march to get things done even with our ability to stop time.

Obviously, we all know there’s no way around it: time is finite.

We can’t actually make more time. And yes, you also know that when you’re constantly encouraged to go out there and start making time for yourself, it’s a metaphor for having space to make your personal needs a priority.

But there’s an insidious, shadowy thing that happens with this particular metaphor.

Underneath it there is an unspoken, behind the scenes expectation that women will somehow be able to fit it all in, in spite of the constant nature of time. And although we are hopefully long past the conversation about how women can and should do it all and have it all, we’re still trying to make more time magically appear.

If you’ve ever been entranced by this particular myth, you know how uncomfortable it can get.

You try to fit your needs in among all the other stuff you’re doing. You believe that if you just try hard enough, state your intentions clearly enough and plan your time well enough, it will happen.

You’ll not only cross everything off your list, but somehow discover the secret to summoning forward space between the lines of that list. Space for yourself.

But then, it doesn’t happen. You find yourself racing to get out of work on time or pick up the kids or clean up the house or a myriad of other responsibilities, only to discover at the end of it all no additional time for yourself has magically appeared.

And right about then you begin to wonder what’s wrong with you, because aren’t all these other women having successes, making time for themselves and getting everything else done too?

And perhaps, at some point, you begin to suspect that it’s all a set up: for overwhelm, anxiety, bewilderment.

What no one tells you is that it’s not about making time. It’s about taking time.

Long ago a very wise therapist explained how very different taking time is from making time. Taking time isn’t so much about good intentions or excellent planning. No, taking time is more like an internal rebellion, because it requires you to stop and let go.

But it’s a different kind of letting go.

It’s not really about making conscious decisions to drop things off your list. It’s more about not really knowing what the outcome will be when you take, or sometimes just grab, time. You may not even know yet what you’re letting go of when you rebelliously take time in this way.

It’s like the day last week when I decided to put aside the list and make a collage instead. And in the act of pushing it aside, I also had to push aside knowing how things would turn out.

The next morning I went outside and discovered that one of the plants had become a dried up imitation of its former self, because I chose the collage over many other things, including watering.

Was it worth it? Yes.

Was I little bit sad about the plant? Yes.

Could I hold the joy of making the collage alongside the sadness about the plant? Yes.

That’s not usually a problem, though, for the women I know (including me) and the women I work with.

So what I am advocating is opening up to the wisdom of small rebellions and not knowing.

Opening up to possible regret (it’s really okay) and accepting that we have so many more potentials within us than we could ever truly live, including getting it all done all the time.

Instead, you begin claiming time and claiming space for whatever you truly need, whether that’s art, writing, music, reading, gardening, self-care, community, nature, meditation or something else entirely.

And then, the landscape before you opens up to give you space to do the only thing you can do.

Perhaps your list of pressing tasks is still long.

Leave it there fluttering in the breeze,

to do the only thing you can do.