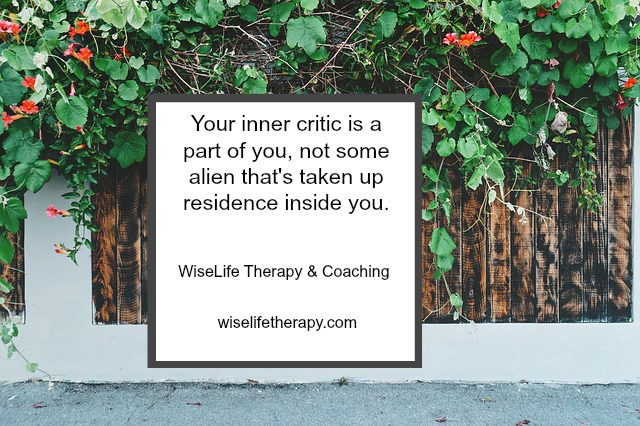 Do you ever just get fed up with that critical voice within? Maybe sometimes you simply want to lash out and put it in its place and be done with it for good. The interesting thing is, though, that silencing it probably won’t help you feel any better or succeed in abolishing it. And perhaps the way forward is more about being kinder to your inner critic.

No doubt you know the voice that I’m talking about.

It’s the one that tells you you’re not measuring up or that life is hard or even that you’re stupid. Or whatever your personal version of that is.

Often it comes automatically and catches you off guard. Or it becomes second nature, almost like a mantra that has possessed you and resides somewhere deep within. You probably also experience body sensations that go along with it.

So it’s understandable that you might want to exorcise it and shout back: No, you’re stupid! Or Shut up! Or even STFU!

As I write this I can see that it might feel like a release, how it might seem cathartic to fight back like that. But as strange as it may sound, real release and catharsis often comes when you experiment with being kinder to your inner critic.

Not long ago, though, there was a theory that proposed it was in your best interest to fight back against the critic. And that doing nothing or being kinder to your inner critic would intensify it. The reasoning went like this: in order to get the upper hand you needed to put it in its place.

In fact, I still have books on my shelf that recommend you rant and rave at your inner critic and say things like…

And when I search “inner critic fight back” over a million results pop up, even today.

Years ago I sometimes suggested this technique to clients, but they rarely embraced it or found it helpful. And personally, when I’d try it with my own inner critic, I discovered that it actually made me feel worse.

And when you consider why fighting back doesn’t really work, being kinder to your inner critic starts to make a lot more sense.

After all, your inner critic isn’t some alien who’s taken up residence in your body.

No, your inner critic is a part of you, an inner voice or belief that you likely developed in order to emotionally protect yourself somewhere along the way.

And the last thing it needs right now is for you to attack it.

Thankfully, neuropsychology has given us a lot more insight into how the inner critic really works.

The inner critic gets housed in our implicit memory, the part of the brain that’s responsible for automatic learning, and helps us do things like driving a car or tying our shoes without having to think about them.

But it can’t understand our good intentions in fighting back against the critic. Instead, when we fight back with negative language it automatically latches onto those negatives.

For instance, in the example I gave above, your brain is going to hear: poison, liar, crap, screw you, put downs.

What it can understand, though, are your efforts to soothe it, be with it and understand it.

So kindness and self-compassion lead the way when it comes to reaching your inner critic.

There are many practices to help with this, and I’ll write more about them in future blog posts.

But the simplest way to begin, right now, is to try to bring compassion and empathy to your inner critic (who, remember is a part of you) by stepping into its world and becoming aware of its roots without judgment or shame.

This revolutionary act of treating ourselves tenderly can begin to undo the aversive messages of a lifetime.