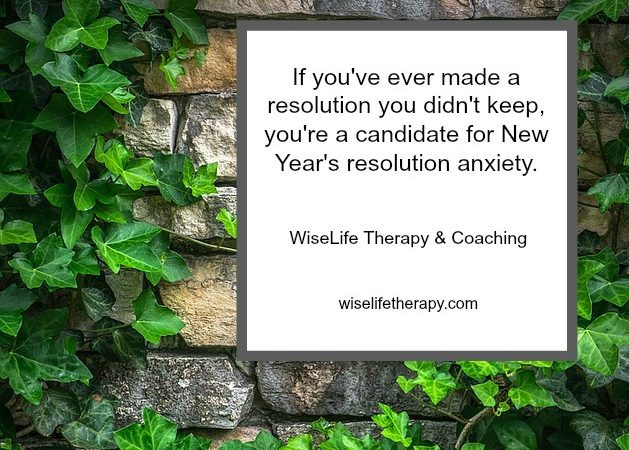 We’re four days into the new year. And no doubt you’ve seen or heard something about New Year’s resolutions by now.

Perhaps someone has asked you if you have any, or you might already have your own list. Or you’ve seen something about them.

And maybe, if you’re prone to anxiety or have a history of worrying (like me), you could also be feeling the creeping onset of what I call New Year’s resolution anxiety.

Personally I was doing pretty well with New Year’s resolution anxiety until yesterday.

It started when I was tidying up and dropped a stack of newspapers. (Yes I still have a subscription to our local Sunday paper!)

Anyway, one of the sections of the paper fell open to Dear Abby, which I haven’t looked at in at least a decade. I didn’t even know it was still a thing.

Apparently there’s a yearly column on resolutions, focusing on Just for Today. As in: Just for today I’ll face reality, improve my mind, be agreeable, be kind, etc.

But it wasn’t these aspirational goals that sparked a twinge of New Year’s resolution anxiety for me. Rather, it was the part about what we shouldn’t be doing: obsessing about tomorrow, dwelling on thoughts that depress us, being mental loafers, speaking ill of others.

I know, these phrases are strangely quaint aren’t they? And yet…Ouch!

Not only do they call us out as potential losers, they hint at all the resolutions we’ve made in the past but didn’t keep.

If you’ve ever made a resolution you didn’t keep, your brain automatically makes you a candidate for resolution anxiety.

That’s because your brain has a tendency to go negative and is more prone to focusing on your perceived failures than your successes.

As you may know, a part of the brain (the emotional brain) is very good at focusing on the negative and bypassing the positive. As Rick Hanson so aptly points out…

In effect, the brain is like Velcro for negative experiences, but Teflon for positive ones. That shades “implicit memory” – your underlying expectations, beliefs, action strategies, and mood – in an increasingly negative direction.

Our brains react to language this way too. For example, when I look at those negative words in the Dear Abby column like obsessing, depressing, loafer and speaking ill, I know my brain will latch onto them.

And unless I’m consciously aware of what’s happening, it’s the perfect setup for feelings of worry, tension, doubt, unease and self-defeat.

The fact that our brains adore repetition complicates things even more.

I don’t know about you, but back in the day when I did make resolutions I wasn’t very good at keeping them. And while I don’t want to project my stuff onto you, there’s actual research about this. Most people struggle to maintain their resolutions.

So when you begin another year repeating the same set of goals that you haven’t had much success with in the past, your brain is going to hook onto the part of the goal that feels like failure and inadequacy rather than self-improvement.

Furthermore, if you frame a resolution as being about what you want to stop doing, as in “I want to stop hiding out,” your brain will mostly notice the negative part (hiding out) rather than the good intention about stopping that behavior.

No wonder resolutions can open the door to anxiety.

Of course, I know resolutions work for some people, and if that’s true for you it’s all good. But if not, I think it’s wise to ponder what’s motivating you to take on the resolution.

Sometimes we grab onto a goal as a way to fix something we perceive as being wrong about ourselves. Or as a way to bypass looking beneath the surface at the deeper transformation that’s asking for our attention.

You might also jump onboard the New Year’s resolution ship because everyone else is doing it.

Sometimes it almost feels like a societal imperative. Which means it’s probably the perfect time to step back from the urgency and realize that you only have to be you right now.

One alternative to try this year is to cozy up to your emotional brain in a different way.

I actually have great respect for this part of the brain, in spite of its tendencies toward negativity. Even though it is not particularly rational or reasonable, I understand why it does what it does.

It surely speaks a different language, but it is a language I love. It speaks (and responds well to) the language of metaphor, creativity, humor, play, mindfulness, spirituality, movement, the five senses and nature.

It speaks to the mystery and magic of life.

It holds its own special kind of wisdom and healing, and when we welcome it in I believe amazing things can happen.

So, what if you joined with the emotional part of your brain this New Year?

First, consider those resolutions, practices, habits, intentions, goals (whatever you like to call them) that you want to welcome more fully into your life this year.

Then, keeping them in mind, experiment with any of these activities:

What might happen if you regularly did one or some of these things?

I don’t know the answer to that for you. But I’m pretty sure it would feel radically different than New Year’s resolution anxiety.

In the end, I think this quote from Spiritual Director Sandra Lommasson says it far better than I can…that these things we struggle with are here for a reason.

Consider the possibility that what now hampers your life was once a movement of grace that saved it. Perhaps most resolutions do not work because of their disregard of this truth.

One practice…is to simply name the dilemma…”Show me what you want me to know about that.” It’s a simple practice of confession or being with the truth…And then be silent and notice what stirs in image, memory, a felt body sense or perhaps a few words that arrive. You may be surprised at what comes, including the birth of new self-compassion that is the soil for genuine transformation.