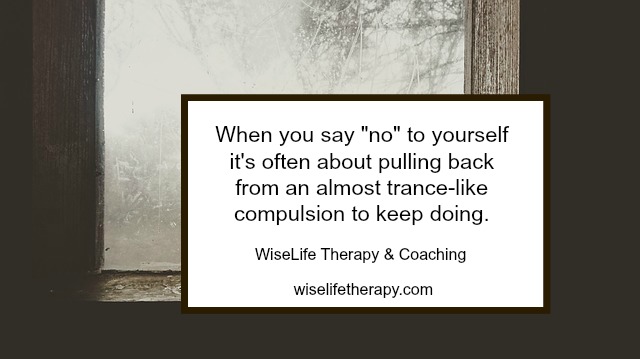 Numbered. Important tasks highlighted. Estimates of how long each would take. A precisely penned roadmap through my day. What I would do and when. Where I would be and when.

I felt a budding sense of accomplishment as I put the finishing touches on it. I imagined how great I’d feel as I neared the end of the list and sat down for a late lunch at my favorite little cafe.

And then something happened to take me out of my reverie. As I was holding the list, my fingers began to grip it a little tighter. I suddenly felt tense. And almost exactly at that moment, a voice within me asserted itself.

No, said the voice. Distinct, strong, almost parental. No.

Without thinking too much about it I decided to take the voice of “no” seriously.

I scrapped most of the list, although I did make it to my favorite cafe for a late lunch. But what happened before I got there was a complete departure from the original plan.

I pointed the car towards the coast. Stopped at a woodsy coffee house for a latte and some writing. Walked the bluff trail. Savored the expansive views of waves crashing onto sculpted rocks. Inhaled the nothing-else-smells-like-it ocean air. Felt the sunshine on my back, breaking through clouds.

All in all, a very good day. Exactly what I needed to replenish and renew myself.

The same topic came up a few days later at a workshop, when the presenter said something like this:

If you find it difficult to stop and take time for yourself because there are other things still to be done, then it’s about something deeper. It’s not about focusing more or better time management.

I thought about this a lot when I got home. Many times, when a conversation about doing less, taking breaks, putting your needs first comes up in sessions with clients (or in my own life), there is almost always an acknowledgement that this would be a good thing.

And then, there are often words of resistance. Yes, but…

Then I remembered that when you say no to yourself it isn’t always about stopping the critical voice within.

When you say no to yourself it’s often about pulling back from an almost trance-like compulsion to keep doing.

And the presenter was right: when resistance appears, it’s an invitation to look deeper, to look at what’s underneath.

I suspect that lurking beneath the compulsion to keep doing is a deep archetypal story. In fact, a series of such stories.

Stories that want to be recognized and unpacked. That need to be aired out. Stories with both shadows and light, that often show up like this…

Maybe you see yourself in one or more of these stories?

If so, you’re not alone. And contrary to what you may have heard, it doesn’t mean you’re in the grips of a limiting story that you need to let go or rewrite.

Because the truth is, these stories, these inner characters, will always be there. They exist beyond our experience or history. They’re universal. They don’t go away. That’s the nature of an archetype.

And by looking underneath the surface and giving them a voice, we can partner with them to discover which ones are most present for us. Rather than unconsciously letting them run the show, we can discover other voices within to help moderate them.

That’s exactly what happened for me a few weeks ago. And it was good, but not in a way that I had to be good in order to get things done. And in some ways its was the opposite of how we think about “being good.”