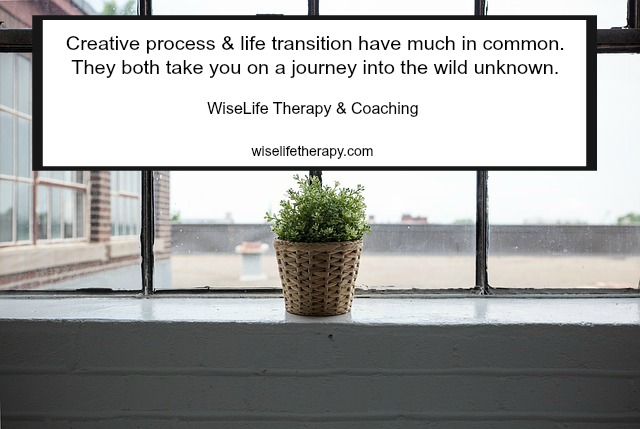 A few months ago I wrote about the signs and clues that tell you you’re probably in the midst of a life transition. And I promised to write more about what you most need during times like these. So I’ve been mulling it over and I keep coming back to this: perhaps what we most need is to embrace life transition as a creative process.

The idea of life transition as a creative process was sparked by author and creativity coach Eric Maisel.

Last summer, Lisa Mitchell interviewed Maisel, and he talked about the anxiety that comes with the creative process. He suggested that you can’t manage this creative anxiety by slapping discipline onto it.

In his words, you can’t white knuckle your way through it.

Instead, he proposed that devotion was the way through. His inspiration was tenor Luciano Pavarotti, who once said…

People think I am disciplined. It is not discipline. It is devotion. There is a great difference.

And perhaps you nurture life transition in the same way you nurture creativity: by showing up for it and practicing devotion rather discipline.

When you think about it, creative process and life transition have much in common: they both take you on a journey into the wild unknown.

In this wilderness you encounter a push/pull, or love/hate, as Maisel calls it.

Sometimes you’re pulled along by a beautiful river, lovingly carried on a current of ideas and inspirations.

Other times, that same river turns rocky, dries up and pushes you away. It’s difficult to navigate, and you wind up feeling lost, distressed and anxious, not knowing at all where you’re going.

But when you start playing with the notion of life transition as a creative process, you open the door to the possibility that it is devotion, not discipline, that can get you through both the good and the bad.

So what does it mean to bring creative process and devotion to a life transition?

Ah, that’s the question I’ve been working through myself during the past six months.

You see, I’ve been attempting to bring devotion and creative process to my own life transitions: the loss of my dear friend Martha, the aftermath of the Santa Rosa fires and the growing pains of this business I’m creating.

What I know so far is that in my bones, life transition as a creative process just feels so right.

Embracing devotion rather than discipline just feels so right.

And it just feels so right to apply everything Maisel said about creative process to life transition.

I can even tell you that practicing devotion will ask you to adopt a kind of reverence, love and affection for what you’re going through, no matter how difficult it is.

I also know now that there are words and habits to dial down when you’re in the middle of life transition: discipline, control, order, willpower, schedules, decisions, deadlines, methods, systems, self-disparagement, disapproval, reprimands.

What I can’t tell you is exactly how you’ll do this.

But I have a few thoughts for how you might make a start.

First, the concept of life transition as a creative process is easier to grasp when you move beyond the common definitions of creativity that you see around you. You know, creativity as a painting or performance or novel.

Instead, consider that life in general, and transition in particular, is fully aligned with the creative process.

You might remember too that the story that plays out again and again in art and history and myth is essentially a creation story and a transition story.

It also may be helpful to give yourself time to define devotion and discipline for yourself. You can even let your body help with that. Ask: Where do I feel discipline and devotion in my body? Is discipline a head thing? Is devotion a heart thing? Or something else altogether? What sensations come with each, and is there a bridge between them?

Finally, reflect on what needs your devotion during this life transition you’re in.

When you’re moving toward life transition as a creative process, it’s helpful to explore if any of these things are asking you to stand with them and stand by them right now…

I am devoted to the practices and rituals that imbue our lives with a sense of meaning and purpose, that help me to live my days in the most emotionally and intellectually productive manner. I am devoted to the notion of devotion itself.