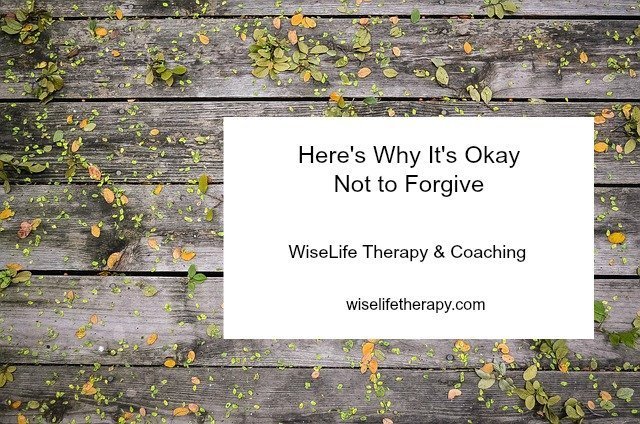 Yes, it’s okay not to forgive. Because forgiveness is a very personal thing.

Often it’s a lifelong journey. But definitely not an absolute requirement for a whole and happy life.

In fact, with forgiveness, each person gets to apply their own personal meaning to it.

And what might be forgiveness for one person wouldn’t seem so for another. And that’s okay.

It’s okay not to forgive because there’s no right way to do forgiveness.

It’s somewhere between complete forgiveness and the anger and hurt that come from wounding. It’s a liminal space that we’re carried through by our own unique rhythms.

Maybe we choose to dwell there for a time if that’s what we most need.

You might even find some peace in the paradox of forgiveness.

The experience of both feeling the hurt and moving towards healing.

Because for sure our emotions aren’t either/or. We humans are so much more complicated than that.

I wrote these words (above) about eight years ago.

I wrote them to someone who was struggling with forgiveness, wondering if it’s okay not to forgive.

So the struggle wasn’t so much about the how part of forgiving, but the why. She was feeling pressured to forgive, and experiencing a kind of societal should about it.

So I wanted to share this because I have a feeling there are a lot of people that find the whole notion of forgiveness confusing.

A lot of people who think they’re doing something wrong if they believe it’s okay not to forgive.

And what I most want to say is that there’s no mandate to forgive. When you think about it, you realize that to feel forgiveness is to feel an emotion, one of many.

And in and of themselves, emotions are neither good or bad.

Of course, when we’ve been wounded or betrayed or wronged, the feelings that come after are usually very difficult.

And I notice forgiveness is often promoted as way to get some relief from these emotions. But the thing that’s most likely to begin to alleviate the pain is acceptance rather than forgiveness.

By acceptance I mean the act of stepping back and acknowledging something like this:

It happened. It was tough. I was hurt. And there’s nothing I can do to change the fact that it happened.

Now, I’m not saying it’s easy to practice acceptance. It comes slowly, with repetition, over time. But it does pave the way for healing.

So acceptance is crucial. Forgiveness, however, is optional.

I’ve had my own dance with forgiveness a few times in my life. Definitely times when my healing depended on me reassuring myself that it’s okay not to forgive.

Because the other thing is, forgiveness is complicated, and we may never want it or be quite ready for it.

In fact, one of the wisest things I’ve read about it somewhere along the way is that if we choose to feel forgiveness we’ll need to work at it and consciously bring it into our lives every day.

Forgiveness is not a one and done deal, by any means.

That’s definitely been my own experience, especially in the process of forgiving my father, who died seven years ago.

After a long relationship cut-off and a lot of personal work we managed to rekindle our relationship.

Mostly that work involved me accepting and feeling empathy for myself.

In a way, it was about forgiving me first.

Eventually my empathy swirled out to my dad. He helped it along by meeting me more than halfway. If he hadn’t, I’m not sure I could have chosen to forgive.

So if you don’t feel ready to forgive or aren’t sure you ever want to, know that it’s okay not to forgive.

Instead, work on acceptance and bringing empathy to your own experiences and woundings.

And if you need to, forgive yourself first.

A version of this post was published in 2014 on my first blog, Living Deep Studio.