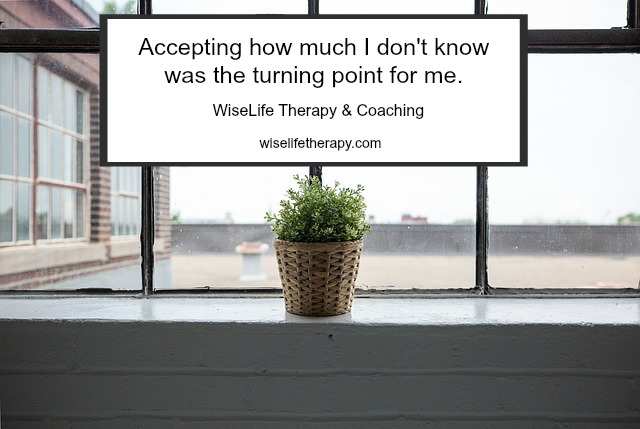 So much has been said about enoughness and its flip-side, not enoughness.  Not surprisingly, I’m kind of partial to the subject, and not just because it shows up often in my counseling and coaching work with women. I also have my own vivid memory of a long ago scrawl on a crumpled piece of paper, my plea to the universe: will I ever be enough? In that moment, I was smack dab in the middle of the war of enoughness vs. not enoughness.

In my experience this is a thorny, complicated issue with many layers.

It can lurk below the surface for years, and your awareness of it can be there but not be there at the same time. You may become conditioned to it, not being able to actually name it until someone else (like a therapist or coach) points it out. It can show up in all kinds of different ways, and here are just a few…

Clearly, enoughness vs. not enoughness can be difficult to get a handle on.

Sometimes I think that’s one of the most frustrating things: that we keep trying to figure it out. As I’ve gotten older I’ve begun to wonder if we give it too much power by engaging with it over and over. Time and again, we proclaim we are enough, yet still struggle with it.

And although I don’t usually write in great detail here about my own life experiences, I’m thinking maybe the best thing I can do is tell you what’s helped me the most in my personal war of enoughness vs. not enoughness. Perhaps something here will resonate with you.

First, accepting how much I don’t know was the turning point for me.

I used to think saying I don’t know or I’m not sure was a sign of weakness. Now, I think it’s a sign of wisdom.

I used to consider ambiguity, mystery, inconsistency and contradiction as puzzles to be solved. Now I consider them solutions in and of themselves.

About a decade ago I heard a wise woman talking about uncertainty.

She said something that made me smile: There’s a tremendous joy that comes with accepting the wisdom of uncertainty.

She was right, and I knew what she was talking about. I’ve ridden those waves of joy and aliveness in the face of the unknown and it’s so freeing. I’ve also crossed the more difficult terrain that comes with letting go of certainty and turning toward uncertainty.

When I finally accepted that life was an uncertain road I found myself in deep and unexpected places of grief and loss.

I had to release a lot of assumptions about who I am and how life and relationships work. It’s been tough at times, but so worth it. It also gets better as you go along. And I’ve realized that for me, at least, it will be a life long journey.

I’ve discovered that the biggest joyful payoff of this journey is that when you step into the place of uncertainty it no longer matters whether you’re enough, because you’ve released yourself from the need to know.

Yes, you read that right: I no longer engage in questions about being enough.

I mean, if I’m choosing to sit with the ambiguities and inconsistencies of this uncertain life, why would I sign up for the ancient battle of enoughness vs. not enoughness? There are no winners there.

So I stopped fighting that war and called a truce between the opposing sides, realizing that sometimes I’ll be enough, sometimes I won’t be. And it’s all good, because most of the time I’ll be somewhere in the middle, the beautiful and uncertain place of paradox where life is truly lived.

I realize that for some it might sound wishy-washy. Or like a recipe for stuckness and a one way ticket to limbo.

But quite the opposite has been true for me. When I turned toward uncertainty, my natural curiosity and desire to experiment got sparked. Movement and risk-taking were unleashed.

All in all, it’s been an energizing (and sometimes scary) exercise in trust-building. Another upside is that my feelings of self-worth have grown exponentially.

And please understand: I’m not saying this has been easy. But every single time I embrace uncertainty, the question of whether or not I’m enough fades like the final scene in an old black and white movie.

Once we believe in ourselves, we can risk curiosity, wonder, spontaneous delight, or any experience that reveals the human spirit.  -e.e. cummings

It is my great joy to offer counseling, life coaching and therapy to women. You can work with me in my Santa Rosa office, as well as by telephone/secure video if you’re outside the area. To schedule a free consultation, click here or call 707-742-9844.