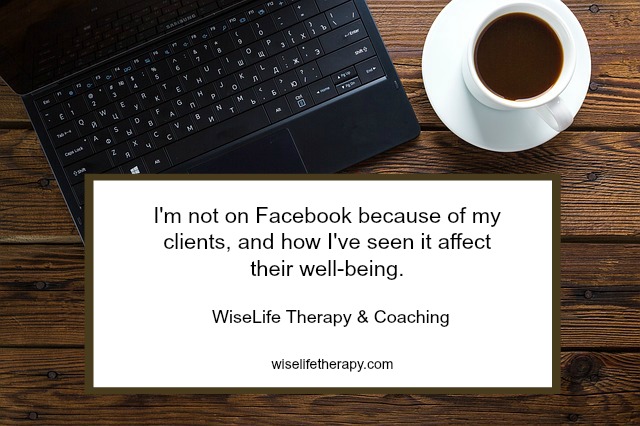 Yes, it’s true. I’m not on Facebook. But it’s not because I’m a social recluse or a technology-averse Luddite.

The truth is, I’m not on Facebook because of my clients, and how I’ve seen it affect their well-being.

Back to the days before it even existed. When I started my private practice in the year 2000, Facebook wasn’t even on the horizon.

Even after it showed up in 2004, few clients mentioned it.

But about 10 years ago I distinctly remember one of my younger clients proclaiming, “Oh no! Now it looks like my mom is going to be on Facebook too.”

Turns out that was just the tip of the iceberg, because by 2009 Facebook’s fastest growing demographic was women over 45.

And somewhere during that time period I started hearing the Facebook stories.

Back in those early days, my clients shared Facebook stories that were joyful and charming.

Like how they had reconnected with a childhood pal. Or their delight at friending someone and being friended back.

Initially, their experiences on Facebook seemed to fill a deep yearning to belong that so many women can relate to. And at that point I got curious about it myself and considered joining.

But things turned, and those early stories didn’t last.

Although I can’t quite remember when things changed, the stories went from being light and hopeful to tense and challenging.

Women started telling me that Facebook sucked their time and energy.

They’d come to their sessions saying they’d just planned to do a quick check-in and before they knew it they’d wasted two hours on Facebook.

Or that it was the last thing they looked at before they went to bed, and then they had trouble sleeping.

Or maybe it was the first thing they looked at in the morning, and then they’d have to rush to get to work on time.

So we’d explore that in our sessions, how to take back their time from Facebook. How to set boundaries so it didn’t become a technological energy vampire.

And after those sessions I’d decide that maybe it was a good thing that I’m not on Facebook.

Women also told me that they felt bad about themselves after being on Facebook.

Sometimes, Facebook seemed to be becoming an authority on their sense of self-worth. Being on Facebook convinced them there was something missing in their lives.

As wise and savvy women, my clients are well aware, logically and rationally, of the dangers of comparing their lives to other women’s lives.

Yet it can be super hard to unhook from this because of personal history and the emotions that get triggered. And for sure, Facebook just aggravates that more.

So again, this is another reason why I’m not on Facebook.

And finally: Women told me stories about how Facebook made them feel left out.

I suppose this is what surprised me most, the stories about people airing conflicts on Facebook or using it to shut out family members or friends.

I’ve heard the plaintive question uttered by more than a few women: “Why wasn’t I invited? Why wasn’t I included?” And then to read the happy update of the thing you weren’t a part of can feel like the worst kind of rejection.

One of my own friends told me that she learned of another friend’s death through Facebook (no one had thought to call her). While I don’t know if this was deliberate or not, it is clearly painful and gut wrenching.

And everything in my bones tells me that these kinds of interactions are not good for us. This stuff is hard enough to deal with in real time and real life.

In spite of all this, I don’t expect many women to get off Facebook anytime soon.

Some of my clients have stepped away, and they do feel happier as a result.

But the realist in me says that Facebook is here to stay, and our fascination with it (and other social media) isn’t going away.

Still, I think it’s wise for all of us to pay attention to the growing body of research about the impact of Facebook, not just on our mental health and well-being, but on our time too.

I mean, how much of your precious time do you really want to give to this? How big a priority is that in your life?

It’s also helpful to remember back to a time before Facebook, which many of us can. You didn’t feel like you were missing out on anything because you didn’t expect to know what was happening all the time. You didn’t have a smart phone so there was no need to be checking Facebook continuously.

And maybe you were more resilient and content within yourself, because you didn’t have to look outside so much for validation.

As crazy as this may sound, I’ll probably be on Facebook soon too.

I’ve discovered that apparently Google has a thing for Facebook.

And when part of your business is brick and mortar like mine is, Google is going to rank you higher if you have a Facebook business page.

And in order to have a business page, you first must have a Facebook personal page!

Although I’ll be losing my “not on Facebook” mantra, I’m preparing for it. And I’m determined to find a way to be on Facebook that’s intentional and life-affirming.

2019 UPDATE: Nope, still not on FB. After all the revelations of the past year I’m more certain than ever that FB is not for me.

It is my great joy to offer counseling, therapy and life coaching to women. You can work with me in my Santa Rosa office, as well as by telephone/secure video if you’re outside the area. To schedule a free consultation, click here or call 707-742-9844.