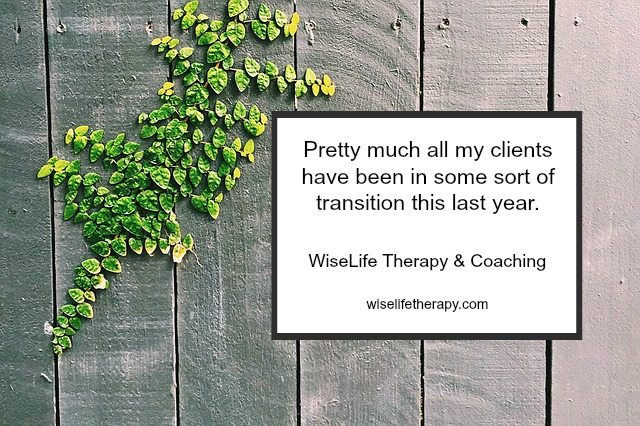 Lately I’ve been wondering: How do you know you’re in a life transition? What are the signs and clues leading up to it?

When I look back on the past year, I notice pretty much all my clients have been in some sort of transition.

It might not have been what initially brought them to therapy or coaching, but almost always, underneath the surface, there was a transition lurking or in progress.

I even found myself mulling over the prospect of life transition in my journal recently:

So maybe the whole world is in transition. Maybe you’re in a life transition all the time, or at least some part of it.

Okay, that might be a bit extreme, perhaps largely prompted by my own many-layered transitions during the past few years.

Admittedly, life transition does fascinate me though.

I’ve studied it. I wrote about it for my master’s thesis. I’ve lost count of the number of transitions I’ve been through.

And I’ve walked the transition path alongside my clients many times.

So, a quick refresher: generally, you enter into transition when something ends.

It might be preceded by an actual event in your life. But Nancy Schlossberg identified another kind of transition too, called a “non-event transition.” It’s a time when deep change is going on inside of you, although perhaps nothing different is happening in your day-to-day world.

However it shows up, the process begins with a letting go, releasing, disengaging.

Then, for a time, sometimes a long time, you’re in a life transition in-between place.

Most of us don’t like it when we land there. It can feel like endless waiting, uncertainty, seeking but not finding.

It’s the emotional equivalent of catching a faint whiff of bread baking, somewhere around the corner. But you get lost and you’re not able to find the bakery. Or you’re stuck in your house, unable to go look for it. And you’re not even certain that it was bread you smelled.

At some point though, you will feel the stirrings of new possibility.

The thaw starts. And in the best case scenario, you’re off to a new beginning, vigorous with renewal and the potential for mad blooming.

But the mad blooming doesn’t last forever. It might come to its natural end when you reach a goal. Or perhaps an unexpected loss or a repeating internal pattern cuts it short.

Maybe you even grow tired of the blooming. It’s too much or you lose your way or you don’t want it anymore.

Which leads right back to the doorway of another ending and another beginning of another transition.

The spiraling, repeating cycle of transition is truly amazing, when you stop to think about it.

And if any of this sounds familiar to you, I thought it might be helpful to share a few signs and clues that you’re in a life transition, or approaching one.

Of course, each person experiences their own unique version of transition. However, there are some common themes underlying almost all transitions.

So here you go: 10 clues you’re in a life transition

Read the following statements and keep track of how many you agree with.

Answering yes to any one of these statements might mean you’re in a life transition or at the threshold of one.

And the more statements you agree with, the more likely it is that you’re in a life transition that is or will become complicated or intense.

Which brings us to: then what? What do you most need during times like these?

Not surprisingly, I have some thoughts about that too. So stay tuned for that in a future blog post.

The lack of a kind of fruitful emptiness can make it hard for our new beginnings to reach us, since they have a hard time getting through when they get nothing but busy signals. We may need to just float in the slack tide for a spell, in the state of what Sufis call sacred drift, trusting that however rich we allow the cocoon phase to be, that’s how rich the emergence phase will be.