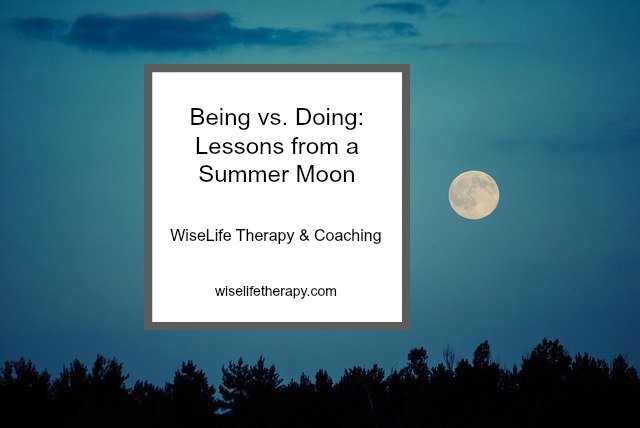 Little did we know what was waiting for us as we got in the car and started our journey home. And never could I have imagined that the moon had a lesson for me about being vs. doing.

You see, it had been a long day of doing.

In fact, on the scales of being vs. doing, that day was weighted heavily on the doing side. Not that it was a bad day, but by the end of it we were tired.

It didn’t help that we were starting late for home. As beautiful as the road ahead was, we didn’t relish driving into the oncoming darkness.

But then, about halfway home, something quite magical happened.

Peaking out just above the hills was June’s full moon. At least, I thought it was the moon. I caught a tiny glimpse of it but wasn’t quite sure.

Dave was driving, and I didn’t want to say anything to him at first. I knew that if the moon I thought I saw was really there, it would be spectacular when it fully revealed itself.

So I didn’t want him to be disappointed in case it turned out not to be the moon. Because I’m pretty near-sighted. Of course, I was wearing my glasses but still, I’m sometimes suspicious of the things I catch out of the corner of my eye until I get a better look.

But more than that, my heart’s excitement at just that tiny glimpse was palpable.

A sliver of moon arcing ever so slightly above the curve of the straw colored hills. The sun’s rays lengthening and moving to shadow as this enchanting moon asserted itself.

Well, it was the moon alright.

It was everything I had anticipated it would be in those early moments. So hugely round, a circle silhouetted against the slowly darkening sky.

Driving toward it, Dave proclaimed that it seemed like we were in a national park, some special place set aside because of its take-your-breath-away beauty. And I wondered aloud if we should pull over and try to get a photo of it. I mean, it was that spectacular.

Just then we rounded the next curve and came upon a guy who had pulled his pickup truck off to the side of the rode and hopped up into the bed. He was holding his phone aloft to the sky, trying to capture its magic.

I suspect we were all enthralled by the moon’s magic that night.

All of us driving on that cozy winding road, making our way home.

A remarkable moon playing hide and seek among the hills and trees, offering itself for a few moments around every bend.

Maybe we’d get an entire minute of it on the straightaways before it disappeared again behind the landscape.

Until that last turn, finally out onto the open highway, where the moon shined us all the way home, releasing us into that sweet spot between being vs. doing.

The next day I opened my laptop and found an email newsletter about the moon.

Could it be that someone else had had an experience like mine? With great anticipation, I started reading.

But it wasn’t anything about bathing in the presence of that beautiful moon. Instead, it was all about everything I could do to make the most out of it. Like intentions and manifesting and taking actions to make my big dreams come true.

On the being vs. doing continuum, it was all about the moon as a goal setting tool.

I’m happy to say I did not think about goals in the presence of that moon. Thankfully, in that moment I understood that I needed to be with the experience, rather than trying to figure it out or direct it.

Still, I have to remember this all the time, because in the being vs. doing conversation our minds often fixate on doing. Then our thoughts can go a mile a minute, creating stress, anxiety and worry.

Our egos tend to want to concretize almost everything too, so if there’s a way to make goals out of something we probably will. And if we believe we’re not living up to those goals, we may judge ourselves harshly and feel depressed.

Even in the guise of communing with nature, we may inadvertently do this. That internal drive to do is strong and obviously supported by the constructs in which we live.

And when we experience too much of our lives through this lens of doing, we miss out on what is called a “multidimensional complexity of experience.”

In other words, our most transformative (and healing) experiences are often in the process, not the outcome.

When we can step away from the being vs. doing conundrum, there is space to allow a pause, to stand in the presence of what is.

Maybe that’s a glorious full moon or something else altogether. But the amazing thing is, these moments of wonder can be had almost anywhere, anytime. If we make an effort.

And that email I got about the moon? Well, it encouraged me to make a different kind of effort, to be reasonable and realistic about my goals and not get lost in a fantasy.

From my way of thinking the moon wants us to get lost in fantasy. To see where it takes us or what it unearths in us. To let it reveal what matters most. (More about that here.)

Maybe you’d like more being and less doing too?

I think there’s a sweet spot on the being vs. doing continuum and many of us are longing for the freedom we experience there. Although it’s hard to articulate I know how it feels. You probably do too.

So if you want to deepen into being with the moon (or some other summer goodness), a simple way to start is to try writing it a letter, composing a poem, taking a photograph, singing it a love song, dancing to it.

Or just get out your journal like I did, and write about it. Or even write the smallest bit on a scrap of paper.

Personally, I think the guy in the pickup got the being vs. doing thing just right.

He slowed down, pulled off the road, stopped. He didn’t take that photo through the windshield. And he didn’t nonchalantly hang his arm out the window either.

He made the effort to jump down from the cab of the truck and then climb up into the bed. I figure he had to work to balance his body on the slight incline, stretch his arms up and reach his hands toward that shimmering circle of amber light.

Sweetly balanced between being and doing.

I don’t know, maybe he posted his photos all over Instagram. But even if he did do that, something tells me that first he got back in his truck and made his way home to his family. And they all gathered around to ooh and aah, to bask in the light of this astonishing moon that had now risen high into the sky.

At least, that’s my fantasy. That’s what I choose to believe.

In being mode, there is a sense of freedom and freshness as experience unfolds in new ways. We can be responsive to the richness and complexity of the unique patterns that each moment presents. In doing mode, by contrast, this wonderful multidimensional complexity of experience is boiled down to a narrow, one-dimensional focus: What does this have to say about my progress in reaching my goals?